As people become ever more aware of their carbon footprint and the potential damage that traditional production techniques have done to the environment, there is now a real boom in the rise of eco-conscious companies who want to make a different and do their bit for the planet. British water brand Belu is one of them.

Setting the bar high, and as an example for others to follow, they have now switched all of their plastic bottle products to being 100% recyclable. 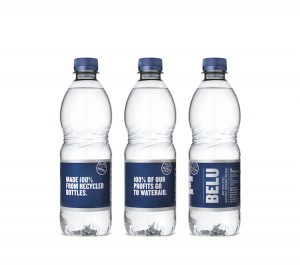 This material reduces carbon emissions by 75% compared to aluminum, and is super easy to recyle, unlike cartons.

Belu’s CEO Karen Lynch knew that something should be done and explains what they plan to acheive:

“We have come to the conclusion that where the single use can’t be removed, the answer to our anti-plastics challenge, is in fact, plastic. Our message is to first use less, but when you buy bottles, buy better. Using 100% recycled plastic is the lowest carbon footprint option that can be part of a circular economy.”

Belu is not like other water companies either. Providing hotels, restaurants and catering providers with natural British water, they give 100% of their profits back to the charity WaterAid. Karen Lynch says their driver is “to do the right thing”.

Some people might scratch the head at why making things from plastic is the most ethical way to do things, but Karen Lynch explains the reasons in doing so:

‘Making bottles from 100% recycled plastic reduces carbon emissions and other pollutants; nothing new needs to be made as it uses a resource that is already here. It will also create demand and value for recycled plastic bottles which will ultimately fuel investment for better local recycling infrastructure.”

Now for some numbers. Belu estimate that their recycled bottles will produce 60% less carbon emissions than virgin bottles, 50% less than aluminum cans, and limit the need of complicated recycling processes that you often have with cartons.

‘When we looked at cartons we found that complexities of materials mean that these products cannot be part of the circular economy we so firmly believe in.’

There are water companies other than Belu who have been doing their bit for the environment, but not on the same scale. Most of them have trialled products made from 100% recycled plastic, but are yet to make them a fully fledged part of their business at scale. Perhaps now though, Belu has shown what’s possible, and might make other water companies sit up and take note.

Belu are a small company when compared to the giants like Evian and Volvic, but don’t underestimate the waves they can make if they do things right. With a commitment to reduce the carbon footprint each year, they are showing other companies what a truly ethical brand really looks like in action.