Rental value declines in prime central London continued to moderate in January, as the rate of supply of new available rental properties slowed.

While there was a 12% year-on-year rise in new rental properties in the final quarter of 2016, that figure was lower than the increase of 30% recorded over the first nine months of the year.

Accordingly, an annual rental value decline of 5% in January was marginally stronger than that seen in the previous two months, as figure 1 shows. Rental values have been declining since May 2015 in part due to higher levels of rental stock.

The fact landlords face a less favourable tax environment from April, has contributed to the slowdown in supply to some degree.

However, demand continues to strengthen, particularly at the higher and lower end of the prime central London market. 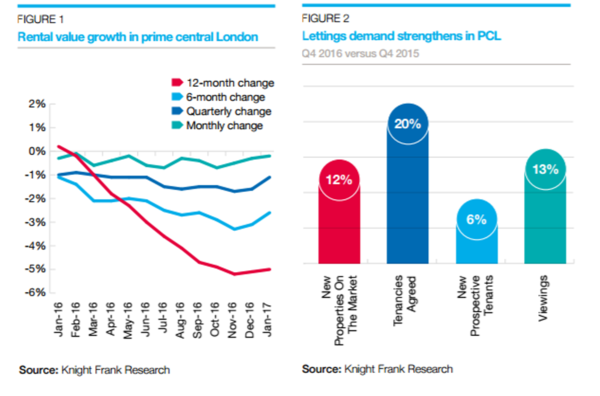 Above £5,000 per week, in the so-called super-prime section of the lettings market, demand remains strong among tenants who are uncertain over the short-term trajectory of pricing in the sales market. The number of super-prime deals rose 5% in 2016 versus 2015, LonRes data shows.

Activity is also relatively stronger below £1,500 per week, as the rental value data in figure 3 shows on page 2.

As figure 2 shows, the number of tenancies agreed across prime central London was 20% higher in the final quarter of 2016 compared to 2015, which puts upwards pressure on rental values. For rental properties between £1,500 and £5,000 per week, activity is improving but remains comparatively slower. The primary cause is that budgets for senior executives at financial institutions have been reduced due to the wider mood of economic uncertainty.

While the UK’s decision to leave the European Union has raised some questions over the status of London as a leading global financial centre (see Macroview section on page 2), this trend for greater efficiency pre-dates Brexit and relates to the increased regulatory pressures on banks as well as a low interest rate environment that curbs profitability.