London – 21 September 2021 – Like last year, 2021 is becoming a complex year for the UK real estate market, with competing forces having different impacts on the sale of housing over the course of the year.  With governmental support, the easing of social distancing restrictions, and continuing low interest rates both Savills and HULT Private Capital are upgrading their positive price growth forecast from 4.0% to 9.0% for the year.

The majority of UK residents spent much more time in their homes in 2020 than they were expecting at the beginning of the year.  The result was a market that saw incredible strength as households with sufficient financial security chose to purchase homes that would work as their substitute workplaces, schools and provided allowable family contact.  Even with a UK economic contraction of -10%, the worst seen in quite some time, 2020 housing prices rose by 7.3%, bolstered by the urgency of a stamp duty holiday for homes under £500,000, which was saving home buyers in Northern Ireland and England of £15,000 on their purchases and initially planned to end of March 2021.  The stamp duty holiday has been extended to the end of September 2021 but reduced to a £2500 savings.  This urgency was mostly driven by a behavioral change rather than underlying economics.  We can see the results of the final urgency push with a massive upswing in June 2021, selling over 210,000 homes with a crash in buying for July. 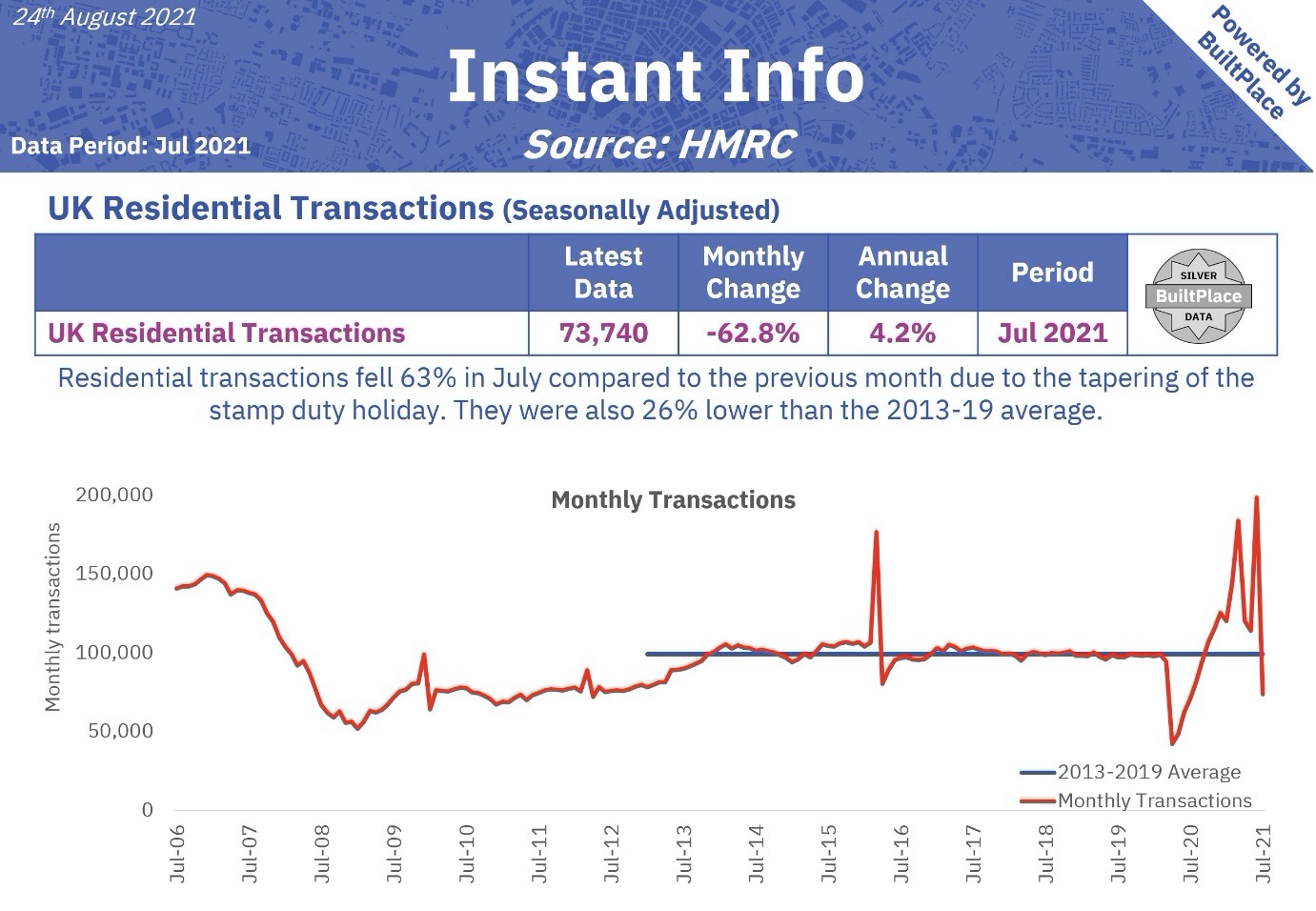 Remarkably with the extended shutdowns, the UK’s housing sales levels ended down only 11% in 2020 compared to 2019, an indication of the strength that has followed.  Savills found that in the last quarter of 2020, UK home buyers spent a record-setting £120.5bn in the fourth quarter of 2020, 22% above the previous ever high in the third quarter of 2007.

As we look at the end of 2020 and beyond, HULT Private Capital says there are several questions that hang over the UK housing market.  Their answers will determine the levels of market activity and price growth to come.

Looking into the future Savills research expects to see traditional economics take hold, and the fundamentals of mortgage affordability determine the price growth levels and regional distribution.  The average price of a home has continued to climb, with August 2021 reaching the highest average level ever of £262,954, a 0.7% increase compared to the prior month’s, a 1.2% rise in the quarter, and a 7.1% increase over prices listed in August 2020.  These increases may slow transactions for the first-time buyer, but this is a good sign for higher-end properties, especially in the Prime Central London (PCL) area, which has slumped since 2014.

HULT Private Capital, a real estate fund that focuses on the PCL’s high-end properties’ John Hudson stated that “Our business has been able to identify properties on the higher end that are both priced well for the seller and still have the ability to increase in value.  Londoners who decided to leave the city during the pandemic and move to the coasts but who purchased their properties before 2014, are happy to profit from the homes and move into much more spacious country housing.  This allows HULT to come in and buy their property while also seeing great returns for our clients.”

Savills research believes that because the interest rate outlook has become “much more benign,” a capacity for further price growth continues.  Before the pandemic, Oxford Economics was predicting that the Bank Base Rate would have risen to 2.25% by the end of 2025.  Oxford has since revised this forecast to only increase 0.5% in the same period, with the first interest rise in rates not expected until the third quarter of 2024; for those with access to capital, a fantastic ongoing opportunity.

The pandemic has broken the historical recession housing market downturn relationship and the geographical house price growth cycle.  The London and South East markets have underperformed the rest of the UK since 2016 due to their over performance of the prior decade.  London, in particular, has been dislocated from the rest of the country.  Excepting Scotland, price growth has been uniform over recent years.  The housing needs change of the pandemic being nearly universal, (some large city exceptions) rural relocation has increased across the UK. 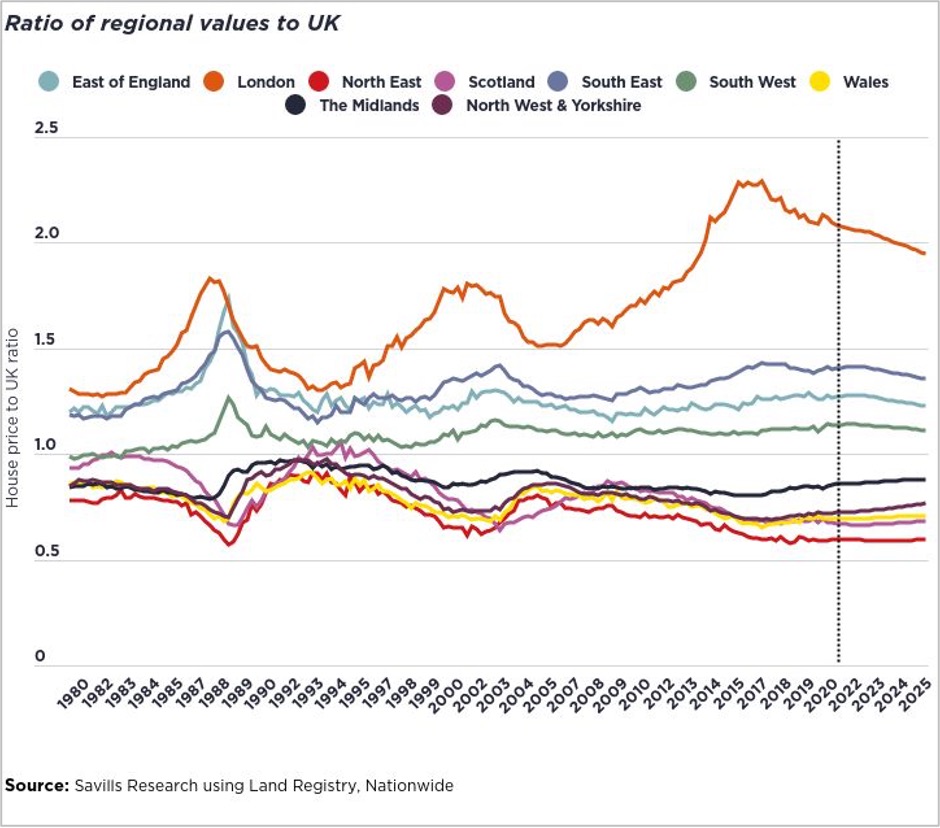 HULT’s John Hudson went on to say that, “In London, affordability, over a number of years, has become less dictated by the average household’s finances, with the market becoming dominated by affluent households.  This buyer profile change, combined with an increased role of equity rather than debt in home purchases continues to deliver the potential for price growth despite a high average price to household income ratio in the area. “A similar view is held by Savills.

According to Savills’ research, the departure of many from London is expected to be short-lived.  They expect “accessibility to the workplace” to remain a significant consideration for most buyers.  The numbers of those working from home 100% of the time will reduce, but may be present in the office fewer days of the week.  For many, working from home was never an option, such as front-line healthcare or service jobs, eventually, many more companies will require employees to return.

In the short term, from a migration perspective, some overseas workers will find more hurdles to return with the new UK-EU immigration system.  But Savills has already seen the fall in EU migrants offset by a rise in non-EU migrants on a national level, and expects this to continue.  Saying, “The city’s population has taken a hit, this is likely to be temporary, and there will continue to be a significant demand for homes, driving growth.” Foreign investors finally able to come back to the country will also be focused on PCL purchases.  HULT’s Hudson solidifies this point, saying he has seen a recent “influx of foreign capital into our fund,” looking to invest in the PCL as travel restrictions lesson and investors take advantage of the PCL buying opportunity.