Explaining the rise of populism throughout the UK is no easy task.

Mark Brolin’s new book, Healing Broken Democracies – All you need to know about Populism, tries to get to the bottom of this phenomenon. Some of the world’s most prominent figures in social science feature in this book, which claims to offer “non-tribal intellectual clarity surrounding the populist phenomenon”.

Within the title, there are many questions posed, including: “When did many voters who struggle to make ends meet start seeing the Labour party as part of the metropolitan elite?” and “When did it yet again become acceptable within so called polite society, fashionable even, to dismiss disempowered voter groups as uneducated throwbacks?”. 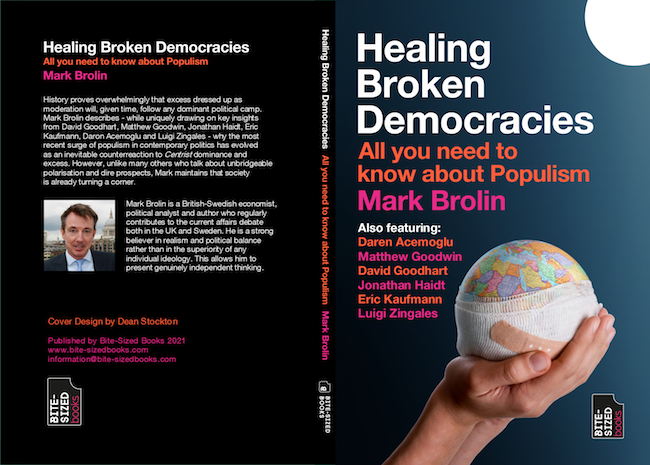 Answering these and many more questions are the likes of economist Daron Acemoglu, journalist David Goodhart, politics academic Matthew Goodwin, as well as several other figures from various elements of the social sciences.

Brolin is a British-Swedish political analyst, economist, and author who regularly appears on British and Swedish media discussing the issues of the day.

One of his key arguments is that Populism has emerged as a result of Centrist overreach. Brolin argues that populism isn’t necessarily a push back against Centrism, but rather “against the overshoot features of Centrism”.

Healing Broken Democracies – All you need to know about Populism is being released by Bite-Sized Books and is available on Amazon.